We first met Vera Hallett and her cousin Christine Rea when they came on one of the site tours on a very wet day in May. After visiting the exhibition at Tudor House, they came into the Hive to talk about some of their memories of Lich Street.
Vera was born at 15 Lich Street in the 1940s, later moving to 1 house No 2 Court where she lived until she moved from Lich Street in 1955. Christine moved from the area when she was three, but often visited her cousin and remembers the street well.
Number 15, opposite the Punch Bowl Inn, was a large house separated into rooms and occupied by several families who shared a kitchen and a toilet.  Vera's neighbours included Mrs Dalton, Mr and Mrs Perry, Mr and Mrs Butcher who ran a boarding house for homeless people as well as Mrs Butcher's brother Arthur Abbott, the chimney sweep who we found recorded in the archives and looked at in an earlier blog post. 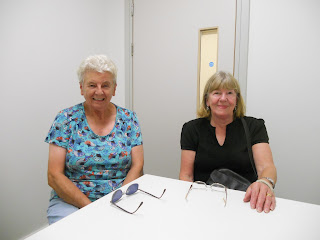 Vera and Christine told us that there was no running hot water and they had to wash in cold water in a shared sink. They remembered that each family had an allocated wash day when their father would light the fire under a big boiler to heat the water, whites were always washed first, then the coloureds and the girls would come home from school at lunchtime to find lines of washing in the yard or, if it was wet hanging, in the kitchen steaming up the whole house. Across their backyard, where they had to go for a wash and to the toilet, was a flat roof and from here they could look into the back yard of Mr Holt the butcher who had his shop on the Shambles. Vera and Christine remembered that, like a lot of the butchers in the street, he used his backyard to slaughter the animals he sold in the shop.


Although the buildings were derelict and they remembered cockroaches in the houses, Vera and Christine felt there was a sense of community in the street and neighbours helped each other, particularly in times of trouble.
Posted by WorcsDigs at 16:06

This work is licensed under a Creative Commons Attribution-NonCommercial 4.0 International License.